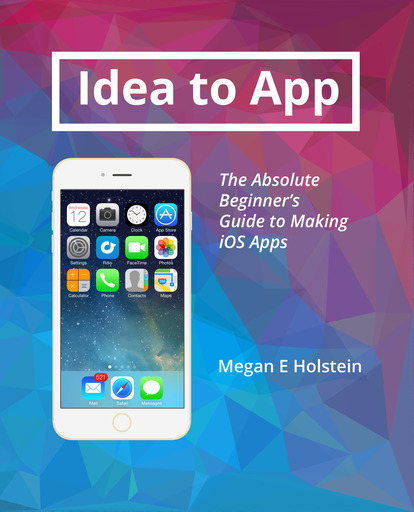 Idea to App is the absolute beginner's guide to making iOS apps. It will take you through the process of creating an iOS app, start to finish. It's written for people who aren't geeks; To read this book, you don’t need to know how to program, design, or possess any app skills at all. This is a book full of information that will help anyone make their own app, not just anyone who can code.

A huge thank you to Valerie and Michael Holstein, my parents, for believing that a fifteen year old could start a company. You are the parents who said “yes.”

Who This Book is Written For

This is a book written for people who aren’t geeks. To read this book, you don’t need to know how to program, do graphic design, or possess any especially technical skill sets at all. This is a book full of information that will help anyone make their own app, not just anyone with coding experience.

If you don’t like programming, you can still make your own app.

This book won’t teach you how to code, because an app is more than code. Apps are small companies, and therefore require marketing, customer relations, product design, and all sorts of things in addition to programming. It is for this reason that expert programmers don’t always create good apps, and good apps are not always created by expert programmers. Being a great programmer doesn’t make you a great small business owner.

Programming the app is only one part of one of building an app; to place the entire book’s emphasis on just that would be to neglect other important parts of a business.

If you plan and make intelligent decisions when it comes to your small app business, you will find success on the App Store. It would be a lie to say that this book has all of the “secrets to success” for the App Store, but you can count on success in the App Store if you work hard and plan. The App Store is not a lottery. Apps are not chosen at random for being featured, and it is not random whether or not your app becomes successful.

There is an element of luck and timing to success, but the elements of hard work and a good app play a much bigger part. You can not just whip up an app, throw it on the App Store, and watch the dollars roll in - nor will you slave away for years at an app, only for it to make no money. You will get what you deserve.

Do You Really Need an App?

Everyone these days has an idea for an app, from the garbage collector to the mailman to your boss. There is always an app for that, too, from a digital girlfriend app to an app that helps you manage multiple girlfriends.

It is popular to think that you or your business needs an app on the App Store. However, this might just not be true. An app is a fantastic platform, but an app is not an end in and of itself. Apps are just one way of getting things done on a computer.

These were the days when everyone felt “you just had to be on the computer,” just as people feel “you just have to have an app” today. The Macintosh II computer had dedicated applications for everything, and you only went on the internet to access basic text and information. Heavy computing weight was pulled by standalone applications such as Word and Outlook, and the internet was just for finding information or for connections inside the dedicated applications.

This resembles the mobile computing experience now. You use your phone browser occasionally, but most of your time is spent inside an app. Apps are what cost your phone the most processing power, and the internet is utilized inside other apps more than it is by the browser.

But things did not stay that way for computers. As internet technology advanced, more and more functionality moved onto the browser. Dedicated games and applications have all but disappeared from your desktop, and all you’re left with are a couple of large and heavyweight applications such as text, photo and video editors, and in-depth games.

It means that things are likely going to go the same way for the smartphone.

Simple applications are going to move into the browser as better internet technologies become more popular and supported, and only big and heavyweight functions of smartphones are going to remain dedicated inside their own applications.

So no, apps are not the end-all-be-all of the smartphone. In fact, if the trend follows history, the app will be largely phased out. We’re still at an early point in thisevolution, where content-consuming apps remain as standalone applications on smartphones. Because of this, lots of apps do still belong as apps. But some common app ideas used to be appropriate as apps, but are not so anymore, like:

-Apps for a single ecommerce store

-Apps for a single band

What all of these ideas have in common is that they’re ideas for single-content providers. Content aggregators make sense as standalone apps, as a one-stop-ship destination for the user. (This would be Amazon, Netflix, or the iTunes Store). However, single-producer websites are better off as responsive websites instead of apps within themselves, because the users aren’t going to be visiting these websites very often. You don’t want to force your user to download an app just to visit a website a couple of times a year.

-Your app will have a limited amount of content

-Your app will have static content (such as an encyclopedia)

If your idea fulfills these and you’re still set on making an app, make sure you’ve thought through why making an app is better than just making your website work on phones. Your app must add so much value that users would prefer it over a mobile website, immediately.

You want to be on guard against unnecessary spending on your app-making journey. It can be tempting to spend a lot of money when you’re trying to make an app, as you find things which will make you more legitimate. These can range from inexpensive things like URLs and business cards, to expensive things like web design services and consultation.

Don’t let concerns about being official, legitimate, or anything else convince you to spend money where you don’t otherwise need to. For the first version of an app, you’re only looking to prove that the concept of your app works - and if it doesn’t, you don’t want to have lost a ton of money in the process.

Leave expenditures which make you seem legitimate until after your first version is released, until after you know you don’t have a dud on your hands.

Do You Need an NDA

We’re going to take a moment and specifically address this myth before we get started, because believing in it will seriously impede your progress throughout this book.

The myth is that you need an NDA to protect your app idea from Zuckerberg-style intellectual property theft. It’s not true.

You do not need an NDA to protect your app idea.

NDAs do have their time and place. For instance, if you’re Apple Inc. and are striking a deal with AT&T for exclusive service on the new-and-still-secret iPhone, you want an NDA. If AT&T were to leak that Apple was making a smartphone, it would have ruined Apple’s plans and changed the smartphone market for years.

But, you are not Apple Inc. You are not striking a high-stakes deal with two billion dollar companies, which if revealed could ravage tens of thousands of families. If your idea is shared, you won’t drop dozens of points in the New York Stock Exchange. You have nothing to lose, because you have nothing at all.

Furthermore, Apple had a real and concrete product, not an idea, when they were pursuing a deal with AT&T. The AT&T NDAs were not protecting Apple executive’s ideas for an iPhone, they were protecting the iPhone. All you have is an idea.

An idea that, likely, someone has already had before. Probably many people have had before. When starting to make an app, all anyone has is an idea.

Quite apart from the needlessness of an NDA, it’s counterproductive to even request one. Many industry professionals will outright refuse to sign one, and you don’t want to lose the valuable resources of money and mentorship over an NDA.

One of the signs of a new app developer is an insistience upon an NDA. Whenever someone says “I have a great idea, but I can’t talk about it without an NDA,” those with experience don’t think “ooh, I wonder how great their idea is! I’m so curious!” They think “Oh great, not another one.” People who demand NDA’s become repellant to the educated and successful when it comes to the field of mobile apps.

If you demand an NDA, your company probably won’t get very large anyhow.

Lastly and most importantly, the only way to validate your idea (make sure it’s even worth the effort) is by talking to a lot of people. You will have to tell people about your idea to do so. There is an extremely thin chance one of these people will steal your idea, but that segues into the next point.

Ideas are so worthless on their own that Seth Godin put 999 of them on his blog for free. Look through those ideas and you’ll notice that some of them are actually pretty great. If ideas were worth so much, Seth Godin would have sold them or protected them instead.

If you still feel that you ought request an NDA, make sure your reason for doing so is unique and compelling. Be able to defend your use of an NDA when you inevitably encounter resistance.

This is the disclosure policy about affiliate links in this book.

If you have a strong objection to participating in affiliate programs, go ahead and Google the link mentioned on your own to sign up. What we don’t want is you using an inferior service because we placed an affiliate link you objected to.

If the recommended service was not awesome, there would be no link provided at all.